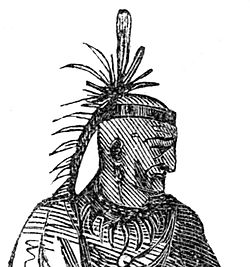 Hokolesqua, spelled variable as Hokolesquaw, Colesqua and Keigh-tugh-qua, was an important Shawnee chief in the years prior to the American Revolution. His name is said to translate into something similar to 'Cornstalk.'He first came to the attention of history during the 1760s as the leader of a band of Shawnee warriors who ravaged the Virginia frontier, killing and kidnapping white settlers.
His place of birth was likely in Pennsylvania in about 1720. The exact location is not known. Cornstalk indicated in a speech that his father's name was White Fish. The records of the Moravian Missionaries point to Paxinosa as his father or grandfather. Paxinosa was also a Shawnee Chief. It wasn't until the advent of the Internet that this Shawnee Chief became connected through a series of dubious unsourced connections to the Powhatan Indians.
According to many internet sites the father of Hokolesqua was a man named Okowellos. I cannot find a single reference to this name in any reputable book or journal. He was not mentioned in any contemporary writings during the 1700s and no scholarly historians or biographers mention this name. A reader has posted two sources for Okowellos, see the comments below. All of the information about Okowellos seems to come from the Shawnee Heritage Books by Don Greene. See this post about him.
Unfortunately, this mythical ancestry has been picked up by several fiction writers and is included in multiple fiction books.  According to these books Hokolesqua has a dozen or more children. And he very well may have but, the only named child I can find is a son Ellinipsico who was murdered along with his father at Point Pleasant in November of 1777. There seems to be a lot of people who believe they are related to Hokolesqua but I have not seen and documented proof of relationships.
If you know of any definitive research that might provide proof of these relationships please pass them along.

addition:
I have read that a Shawnee man who was a hostage of Lord Dunmore was a son of Cornstalk, his name was Wissecapoway (Captain Morgan). See Calloway.