searcher or researcher
Families come in all shapes, sizes and styles; so do the people who search for them. We may share a  common love for genealogy, but we don't always share the same methodology in its pursuit. Most ancestors hunters fall into one of two categories; searcher or researcher. So ask yourself, are you a searcher or a researcher? Do you know the difference? Up until quite recently, I would not have been able to answer that question. 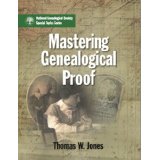 I am currently finishing up an Internet genealogy course based on the Thomas W. Jones book, Mastering Genealogical Proof. This course, which I highly recommend, in fact I cannot recommend it enough, has been a real eye opener. I have always been serious about my genealogy, but this class has helped me evaluate/reevaluate not only my research process, but that of others. This process, the Genealogical Proof Standard (GPS) is critical for genealogy researchers. In fact, no reputable genealogist would consider conducting research without it.

(keep reading, I'll get to Cleopatra)

So what does it mean to be a searcher? I think there are several types of searchers. First, there is the serious searcher. A serious searcher is looking for their ancestors, but not in the most productive manner. They kinda jump around from books to web to other documents. They never properly cite sources or more importantly take the time to closely evaluate the source. Is it original, derivative, authored, is the evidence primary, secondary, unknown and is the evidence direct, indirect or negative? The serious searcher reaches a conclusion, which may be correct, but they cannot adequately communicate to others how they got there. This was me. (and it will be a long slog turning from searcher to researcher).

Then, there is the "I want this to be easy" Searcher. They just go on ancestry.com and copy someone else's tree, and voila, done. Who knew genealogy was so easy, it only took me a week to complete my tree and here's the exciting bit, I'm related to Sitting Bull, Henry VIII and Charlemagne. Next week I'm going to learn Mandarin Chinese.

A third type of Searcher is the one who already knows the answer. They flit from website to website looking for someone else's 'research' that fits the answer they want. Did Great Grandma tell you that you were related to someone on the Mayflower? Searchers jump from ancestry tree to ancestry tree looking for one that "proves" Grandma right. Did Grandpa tell you that your Great Grandma was a Shawnee princess, search until you land on website that tells you, heck yeah, Grandma was not only a Princess but the long lost daughter of Chief Powhatan. This searcher will dismiss any and all evidence to the contrary.

cleopatra and the GPS
Cleopatra was an Indian woman born in what is now the Tidewater Virginia area, perhaps around the year 1600 or so. Nothing is known about her other than her English name and that Thomas Rolfe, son of Pocahontas, called her his mother's sister. Based on the relationship between Pocahontas and Cleopatra it is believed that Cleopatra was the daughter of Powhatan. If I was doing research on Cleopatra I would need to start with a question. Let's say my question was: When was Cleopatra born? Who was Cleopatra's husband? Or who was her mother?

Do you have a 'research' question about Cleopatra? Start, or continue, your research with my article on Cleopatra and her family. Check out my sources and see if they are real, who knows maybe I just made them up to look impressive. Maybe I misread or misinterpreted them. Use some critical judgement. When you leave this page, go do some more research. Reach your own conclusions, not mine and not someone else's. If you find something new come back and give me a answer to your question. And don't forget to bring your sources with you.
*************************

Finally!  Here is what I know about Cleopatra

chief powhatan
The Tidewater region of Virginia was, at the time of Cleopatra's birth, under the control of a paramount chief who was and is known by the name Chief Powhatan, but whose real name was Wanhunaconacook (this is one of several contemporary spellings of his name). [1] Powhatan, as I'll call him, was the head of a confederation of about thirty or so Algonquian speaking tribes living in and around the Chesapeake Bay. Very little, if anything, was known about Powhatan or his people prior to the arrival of the English. The Spanish had made a brief attempt to establish a beachhead with the purpose of converting the Indians to Christianity, but the small contingent of Jesuits were quickly murdered by the local Indians. [2] What we do know of Powhatan and his family comes from the contemporary writings of the English explorers and colonists who came to Virginia and documented what they saw and learned as they explored their new home.

According to current members of the Pamunkey Indian Tribe, the parents of Powhatan are unknown. Forget about Murmuring Ripple, Dashing Stream and Morning Scent Flower and all those other names you see on the internet because they belong in a file folder labeled junky genealogy. It is possible that John Smith and others asked Powhatan about his ancestors, but the names were not recorded, and if they were I believe they have been written like his, Wahunsenacawh (the original English spelling), and not some dubious English translation. Another reason some scholars believe that Powhatan did not/would not reveal his ancestors names has to do with the Algonquian culture and that they did not speak of the dead for fear of causing grief for their survivors or for fear of ghosts, as the dead were believed to come back and make people ill. [3]

We do know that Powhatan inherited his right to lead from his mother. As a matrilineal society the power of the tribe passed through the female line. Leadership was transferred to the oldest son and then to his brothers and finally their sisters. When Powhatan died he was succeeded by his brother Opitchapam and then Opechancanough. A third brother, Kekataugh, did not succeeded to the ultimate leadership position, but he did rule the Pamunkey Tribe, along with Opitchapam and Opechancanough. [4]

William Strachey was born in 1572, a world away from Powhatan.  His home was in Saffron Waldon, Essex, England. After attending Cambridge University he embarked on a diplomatic career which eventually lead to his boarding the ship The Sea Venture in 1609. Destination: Virginia. Also on board was the new Lt. Governor of the fledgling colony, Sir Thomas Gates, and John Rolfe and his wife. Despite being shipwrecked in Bermuda, most of the crew and passengers made their way to Point Comfort, on the Chesapeake Bay on 10 May 1610. Sadly, but significantly, Mrs. Rolfe and her new baby, Bermuda, did not survive. [5]

Arriving in Jamestown on 24 May 1610, the newcomers were shocked by what they found. Of the original 240 or so colonists, only about 60 were still alive. This period has come to be known as "The Starving Time."  Having no extra supplies, Lt. Governor Gates was on the point of abandoning the town when Sir Thomas West, the new Governor, arrived with life sustaining supplies. The colonists would stay. [6]

William Strachey was appointed secretary and recorder of the council set up by the new Governor. I don't know if it was always his intention to write a pamphlet on Virginia, but he began to make note of what he saw around him.  He interviewed, extensively, two English speaking Indians, Machumps and Kemps. According to James Horn, Strachey first met Machumps in England, where he spent some time. From these two men he gathered information on the the Powhatan Indians, their lives and culture. Strachey did not stay long in Jamestown, he returned home t in 1611. Back in England he began work on a manuscript about his time in the Jamestown and all that he had learned about the people who inhabited the area. He titled the manuscript "The Histoire of Travaile in Into Virginia Britannia." [7]  Most of what we know of Powhatan and his family comes from his writings.

the wives of powhatan
According to the Indian Kemps, Powhatan had numerous wives. At the time (1610-1611) of Strachey's interview, Kemps named twelve of the current favorites. One of the wives' named was Winganuske. She was the sister of Machumps. [8]

Strachey wrote that Powhatan was said to have had at that time, twenty sons and ten daughters. Winganuske, a favorite of Powhatan, has a small child in addition to these thirty. Pocahontas was also named, in addition to the fore mentioned thirty. [9] What he does not tell us is the name or sex of Winganuske's child or the name of the mother of Pocahontas. In fact here are his exact words:

I say they often reported unto us that Powhaan had then lyving twenty sonnes and ten daughters, besyde a young one by Winganuske, Machumps his sister, and a great darling of the Kings; and besides young Pocohunta, a daughter of his using sometyme to our fort in tymes past, now married to a private captain called Cocoum, some two years since. [10]

[8] William Strachey and Richard Henry Major, The Historie of Travaile Into Virginia Britania:   Expressing the Cosmographie and Comodities of the Countrie, Togethir with the Manners and   Customes of the People, (London, 1894); digital images, Google Books         (http://www.play.google.com : accessed 20 October 2015).

[9] Strachey and Major, The Historie of Travaile into Virginia, 54

[10] Strachey and Major, The Historie of Travaile into Virginia, 54

[11] Strachey and Major, The Historie of Travaile into Virginia, 55-56

[12] Strachey and Major, The Historie of Travaile into Virginia, 57

[13] Strachey and Major, The Historie of Travaile into Virginia, 60

1. As for myself the belief in Opechancanough as my 8th grandfather fits because while stationed in England in the 50’s I had a strange urge to kill English women and children.This of course bothered me greatly so much so that I would not even tell my shrink.Finding out about Opechancanough had let me realize that it was bred into me and I am not really a potential mass murderer.For this reason I embrace Opechancanough as mine and honor his name for being probably the first native American to fight for Indian rights.I even call my new grandson "Opi" even though my son named him (xxxxx).